A dark time in my career. 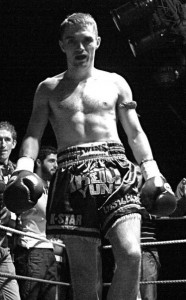 Thailand is an amazing place, I actually feel more at home there than I do here, I have done since my first ever visit. I find the culture and traditions fascinating, the food’s delicious (as long as it’s not too spicy) and the scenery breath taking.

However, those that have spent long periods of time in Thailand, especially Bangkok, know it has a dark side. Like any city, Bangkok is littered with gangsters, gambling, loan sharks, bars, and thieves. I’ve seen Bangkok really destroy people when they have been there too long and amongst the wrong crowd.

In 2005, I encountered this darker side of Bangkok, which I may go into more detail at a later date.

For now I’m going to talk about a fight I would rather forget, as the whole experience wasn’t one I enjoyed.

I’d run into some financial difficulty, i.e. not a pot to p*ss in. My rent was over due on my apartment and they’d already threatened to cut the water off if I didn’t hurry up.

As I didn’t have any money at this time I was training at a very crap gym. They asked for 30% of what I earned when I fought, which I thought was a good deal at the time; the logic being, they would want to get me fights so they could get money out of me.

The training wasn’t the best and extremely cliquey if you weren’t Russian. I was barely in the gym to be honest with all the crap that was going on at home. I just had no motivation.

I had a fight offered to me in Cambodia. I wouldn’t have accepted it to be honest but if I didn’t I would have been evicted from my apartment and lost all my furniture.

As the fight drew closer I asked who was coming with me to work my corner; “you go with another gym, they take care of you.” was the response. So no one I knew was coming…great.

I sat up most of the night before my flight to Cambodia. I was really thinking of pulling out. I hadn’t trained so my condition wasn’t at its best and I knew no one who was going or who I was fighting.

I had no choice, I needed to pay my rent or I’d be thrown out and left with nothing.

I arrived at Don Muang airport. I’m usually depressed when I arrive at this airport because it usually meant I was going back to the U.K.I was depressed now for a whole different reason.  There were two other western fighters who were on the same bill, they were stood with a middle aged Thai man and a younger looking one. I can’t remember their names now but one was quite a big promoter I believe.

We arrived at Phnom Phen airport. It was very quiet, hardly anyone around except the staff, this really didn’t help my mood as it seemed very eerie. A few of them laughed at us as we went through customs, especially at the French lad who we were with. He was set to fight Eh Putong.

Eh Putong was their most famous fighter at the time, the hype around him I can only describe as how they portrayed Tong Po in Kickboxer. He was there hero, everyone idolised him.

As we got out of the airport there was a TV crew waiting for us with a huge crowd around them. Some people ran over and put flowers around our necks while the cameras were rolling. It would have been great if I was actually interested in this fight.

We were told we were being taken to their channel five TV studios for a live interview about the up coming fights, after that we could go to the hotel and relax.

As I looked out of the window on the mini bus I noticed that there weren’t many cars like in Bangkok, mainly bikes which made the roads seem really empty to me.

I felt a little uneasy. Regularly someone would ride up to the bus just so they could look in, see us, laugh and then ride off.

We arrived at the studio to be hurried in; I’m guessing because it was live they may have been behind schedule.

The place was packed with a large audience which were enjoying the singing and dancing act that was on the stage. When the act was over, we were called out and interviewed about how we felt about taking on their best.

The woman interviewer spoke really good English almost with an American accent. Either she studied in the states or her English teacher was American. Each one of our response she translated out to the public.

After a short interview live on Cambodian TV we headed off to the hotel. Again, the peering motorcyclists continued to drive up to the bus.

All I kept thinking was, “I don’t want to do this” I sat back in my seat and I pined to be back in Thailand.

The weigh in was the next day at 7am at the back of the studio. Everyone weighed in ok, so now it was just the waiting game till the show.

It wasn’t too long as it all kicked off at 12pm; all I kept thinking was “it will all be over soon.”

Across from the studio was a small office building, which was nice and air-conditioned, this is where we had our hands wrapped. We had to go into the studio to be massaged.

I was massaged on the fire escape, which meant the public could go there. Within minutes the area was filled with spectators looking at me and poking me. I felt like a freak show. I was told to keep an eye on my things by the Thai trainer who was massaging me.

Usually the oil burns unbearably on my skin in the South East Asian heat, but this time I didn’t noticed it as my thoughts were else were.

The changing room area was around the back of the stage. The best way to describe how they looked is they were like batting cages. Very small very claustrophobic and extremely hot. The day was getting better and better.

I was the first to fight from the western team. The studio, now turned into a boxing stadium, was packed to the brim. It kind of reminded me of those old videos of Lumpini Stadium I used to watch from the mid 90’s and the crowds pored in to watch the fights.

At the far end of one of the stands I noticed four westerners waving the St. George’sflag, I thought that was nice.

I got into the ring and the usual ceremony took place where I did the Ram Muay and my Cambodian opponent did what ever it is they do. I had no Mongkon on while doing the Ram Muay as the Thai trainers failed to bring one.

The fight started, and I wasn’t doing too bad, a little sharper than him but not for long. The Cambodians are known to be strong with their elbows. He came out, firing them on all cylinders.

I got cut above my left eye. My first thought was, why am I doing this? He grabbed me in the clinch. I just had no strength to deal with him as I’d barley trained and what training I had done was pitiful.

I saw the first round out bleeding. I got back to the corner to be only told “Mai bpen rai, mai bpen rai.” (Never mind, never mind)

Round two, and again I was grabbed in a vice like grip. I went down off a knee just to get out of it. I wasn’t at all hurt but I just didn’t want to be there.

I took the count only to be grabbed again, while he held me I thought; I can end this now, all have to do is sit on the floor, take the count, get paid, get back to Thailand and pay my debts.

So, to my disgust, that’s what I did.

How crap I felt after this wouldn’t even come close to if I’d just have got battered for five rounds. I was ashamed with my self and disgusted in what I’d chose to do.

The Cambodian crowd erupted when I went down to the canvas for the final time. I can’t even explain the shame I felt at this point. This was the lowest point of my career.

Back in the batting cages I just sat there feeling sorry for myself and wanting to get away from the whole experience. I looked up and there was a young Cambodian lad standing in front of me smiling. He’d fought earlier on the bill.

He was looking at my cut, he put some Vaseline into his hand and put it across the wound and pinched it close for me so the bleeding would stop. He helped me take my hands wraps off and got me some water to drink.

I had some Spiderman shorts with me and he kept looking at them so I just gave them to him to say thank you. They were huge for him but he was happy and content.

The African lad who came with us won by KO in the fourth, and as expected the French lad was destroyed in two rounds.

We headed back to the hotel after the fights; me still sulking about what had happened.

I was paid ten thousand baht (£200), which meant I didn’t have to worry for another month about my apartment.

Since this fight I have vowed never to do anything like that again, I’d rather take a beating than go down to get out of it. For all I know I could have eventually won that fight but I will never know as I gave up.

The inner conflicts you have can be more hurtful than any physical pain you can get during a fight.

I later found out that the lad I fought had got to a final in a tournament that had Dzabhar Askerov and Mohammed Jali in it (Richard Cadden fought him for a world title). So he was of decent calibre.

I’m not saying Cambodiais a bad place. These were just my experiences. I know many that have fought over there and they have had only good things to say about the country.

Some may have looked at that performance and said that I was finished or it was time for me to call it a day. Even though my heart was not in that fight, I knew I had so much more to give to my career. This wasn’t happening again.

Since this fight I have fought and beaten some of the best fighters in my weight category around the world, also claiming two world titles in the process. Your body will go as far as your mind tells it to.